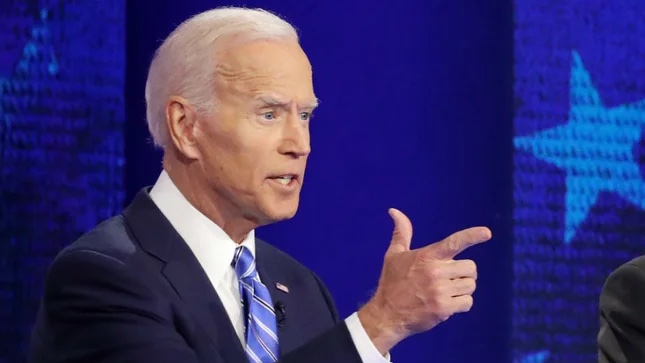 President Joe Biden recently unveiled a comprehensive plan to “combat gun violence and other violent crimes,” which would inevitably strip people of their second amendment rights. The White House released a statement saying President Biden finds the surge in gun violence “unacceptable” and that the administration will take a “whole-of-government approach” as they enter the summer months.

During the speech, he blamed the rise in violent crime on guns and talked about the focus on gun control in his executive actions. He even tried to warn law-abiding gun-owners that they would need “F-15’s and some nuclear weapons” to take on the government. It’s pretty obvious why the White House doesn’t let him out much.

Biden announced they would have “zero tolerance” for gun dealers who willfully violate the law and said that the Bureau of Alcohol, Tobacco, Firearms, And Explosives (ATF) would revoke any dealer’s license after the first offense. The administration released a series of steps they would take against gun owners including a zero-tolerance for rogue gun dealers, promoting “transparency and accountability” about licensed firearms dealer policies, launching multi-jurisdictional firearms trafficking strike forces, and banning ghost guns/modified firearms.

The most chilling part of Biden’s speech was when he tried to claim that the second amendment already places restrictions on the types of weapons that people own. He said “from the day it was passed” that the Second Amendment limits what type of weapon you could own. He mocked people who use the phrase “blood of the patriots” and talk about moving against the government, adding that you couldn’t buy a cannon back in the days.

NEW – Biden: "If you think you need to have weapons to take on the government, you need F-15s and maybe some nuclear weapons."pic.twitter.com/PvQtbxbOjY

“Well, the tree of liberty is not [watered with] the blood of patriots, what’s happened is that there never been, if you want, if you think you need to have weapons to take on the government, you need F-15s and maybe some nuclear weapons,” Biden continued. “The point is that there’s always been the ability to limit, rationally limit, the type of weapon that can be owned, and who can own it.”

Biden even tried to falsely state that the Clinton era’s assault weapon ban reduced crime, which was completely discredited by the Pennsylvania Center of Criminology. The report concludes that the ban cannot be credited with the nation’s drop in gun violence and that “there has been no discernible reduction in the lethality and injuriousness of gun violence, based on indicators like the percentage of gun crimes resulting in death or the share of gunfire incidents resulting in injury.”

The report adds that assault weapons were used in no more than 8% of gun crimes even before the ban.

$350 billion out of President Biden’s $1.9 trillion COVID-19 relief plan will be used to hire law enforcement officers, pay overtime, prosecute gun traffickers, and invest in gun-safety technology for law enforcement officials. The Justice Department also announced that they would need to “update” the legal definition of a firearm to crack down on ghost guns/modified firearms.

The National Rifle Association slammed the gun reform efforts, with NRA spokesperson Amy Hunter claiming that the President would rather play politics than make Americans safer.

“This is a political red aimed at hiding the real and abysmal failures of the Biden administration. Crime rates are high because of the efforts to defund the  and a failure to prosecute career criminals. The simple fact is strict enforcement of existing laws – including gun laws – coupled with the support of law enforcement and prosecutors to do their jobs would result in a dramatic decrease in crime,” Hunter said.

The Biden administration continues to prove that they have no idea how to address gun violence and how gun control works. This will not reduce gun deaths (as gun dealers aren’t selling guns to criminals) and will put law-abiding gun owners out of business in a week. Just look at and with the toughest gun control laws in the country… Criminals will always have access to guns. Democrats might want to try holding people accountable for their actions (for once).